Not filling in zeroes

Example: When entering count data for a community, nonzero observations may be rare- why bother if they’re mostly zeroes?

Solution: Spreadsheets and statistical programs will likely mis-interpret blank cells that are meant to be zero. This is equivalent to leaving out data. Zero observations are real data! Leaving zero data blank is not good in a written lab notebook, but NEVER okay when you move your data into a digital format.

Example: using -999 or other numerical values (or zero).

Solution: Many statistical programs will not recognize that numeric values of null are indeed null. It will depend on the final application of your data and how you intend to analyse it, but it is essential to use a clearly defined and CONSISTENT null indicator. Blanks (most applications) and NA (for R) are good choices.

From White et al, 2013, Nine simple ways to make it easier to (re)use your data. Ideas in Ecology and Evolution: 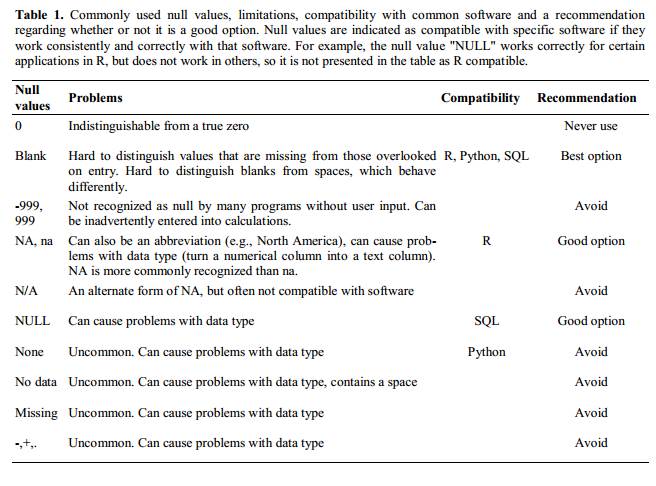 Example: highlighting cells, rows or columns that should be excluded from an analysis, leaving blank rows to indicate separations in data.

Solution: Create a new field to encode which data should be excluded.

Solution: If you’re not careful, formatting a worksheet to be more aesthetically pleasing can compromise your computer’s ability to see associations in the data. Merged cells are an absolute formatting NO-NO if you want to make your data readable by statistics software. Consider restructuring your data in such a way that you will not need to merge cells to organize your data

To consider: What may happen if we merge the cells? 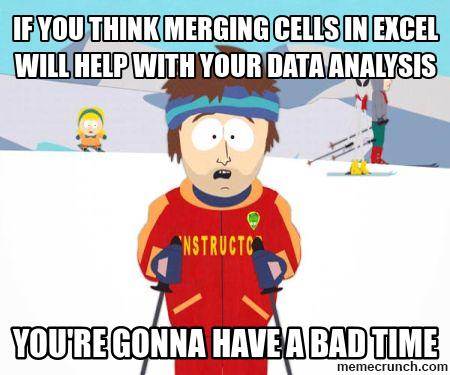 Placing comments or units in cells

Example: Your data was collected, in part, by a summer student you later found out was mis-identifying some of your species, some of the time. You want a way to note these data are suspect. Solution: Most statistical programs can’t see Excel’s comments, and would be confused by comments placed within your data cells. Create another field if you need to add notes to cells. Similarly, don’t include units- ideally, all the measurements you place in one column should be in the same unit, but if for some reason they aren’t, create another field and specify the units the cell is in.

More than one piece of information in a cell

Example: You find one male, and one female of the same species. You enter this as 1M, 1F.
Solution: Never, ever, EVER include more than one piece of information in a cell. If you need both these measurements, design your data sheet to include this information. 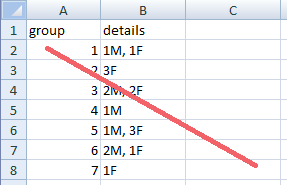 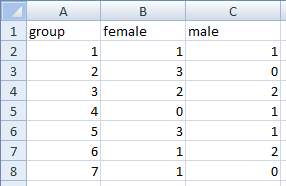 Choose descriptive field names, but be careful not to include: spaces, numbers, or special characters of any kind. Spaces can be misinterpreted and some programs don’t like field names that are text strings that start with numbers.

Example: You treat Excel as a word processor when writing notes, even copying data directly from Word or other applications.

Solution: This is a common mistake. For example, when writing longer text in a cell, people often include line breaks, em-dashes, et al in their spreadsheet. Worse yet, when copying data in from applications such as Word, formatting and fancy non-standard characters (such as left- and right-aligned quotation marks) are included. When exporting this data into a coding/statistical environment or into a relational database, dangerous things may occur, such as lines being cut in half and encoding errors being thrown.

General best practice is to avoid adding characters such as newlines, tabs, and vertical tabs. In other words, treat a text cell as if it were a simple web form that can only contain text and spaces.

Previous: Formatting data tables in spreadsheets. Next: Dates as data.